In The Studio - Clive Brown 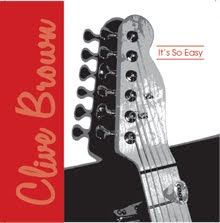 Most of last week I was mixing and mastering recordings by Clive Brown. Clive lives in Port Headland, approx. 1500 km
north (as the crow flies) and he did the recordings in his home studio singing and playing all the instruments, except drums.
After some thought I decided to import the track files into the Tascam MX2424 and carry out all the mixing via the analog console and rack gear rather than mix on the computer, this proved to be the right decision and help create an authentic sound that suited the material.
Altogether we mixed 12 songs, some classic rock / pop and a few originals which he plans to release soon.
(update 9/12/09) Album should be out for Christmas and cover is finished
(update 12/1/10) message from Clive, having a launch in Hedland on Friday 12th. Feb. I am combining it with an art show and I got sponsorship. So free drinks , TAFE are catering and $5 from every CD sold on the night will be going to cancer research. I’m really looking forward to it. Cheers Clive
(update 21/1/10) Here is a link to Clive's new web site Link.
(update 15/4/10) Now available on itunes Australia Store www.itunes.com/clivebrown
Posted by Alan Dawson on Tuesday, October 06, 2009