In The Studio - The Urban Cowboy Band 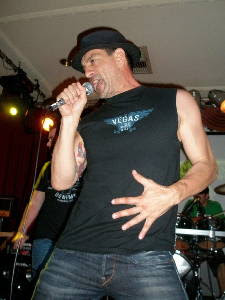 The Urban Cowboy Band returned to Witzend this week to record a second single "Runaway Idol" Tracking is complete and mixing will be finished next week end. (Update 6/3/10): all finished mixed and mastered.
The single will be launched on March the 13th at "Hot Cross Rock" Presented by the City of Bayswater at the Maylands Peninsula Golf Course.
From the UCB press release:
The UCB is comprised of vocalist the Urban Cowboy (former solo/special guest vocalist Rod Grljusich), lead and highly respected guitarist Tom Sterle, drummer Andrew Shaw, bass guitarist Jack Sterle (all formerly from Centrefold), Duncan Strachan (Laced Affair) on rhythm guitar and introducing Mitch Tighe on keyboards

Written and composed by Tom Sterle, Runaway Idol creates the perfect rock pulpit for the Urban Cowboy to evangelize to the converted, the committed, the lost, the unredeemed and those who want to rise again.

"Runaway Idol" will be available as an online download email theurbancowboy@bigpond.com for information.
(update 21/4/10): Have a listen at Triple J unearthed.
(update 24/5/10): Video clip.
Posted by Alan Dawson on Tuesday, March 02, 2010