Mike, a very talented musician, was in the studio last night doing some pre-production for a classical / Flamenco guitar album.  This will be the second album I have done with Mike, the last one being recorded over at the old studio, so with the reception his last album received a new one is very overdue.

We used the pre-production time to help pick which guitar to use for which piece and to experiment with microphone selection and position.  Mike will start recording the album in September. 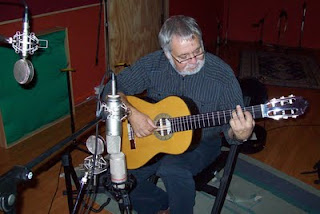