Sally is a regular customer over the years having already recorded 5 albums. She was in the studio last weekend to track the next CD which she sells when busking in the city.  We recoded everything live as that's how sally likes it, just like a live in the studio busking session.  This time around we also had some live percussion.  Sally is quite well known around town and has often featured in photos and articles about the city and it's music, Sally also performs in the street choir and I (as a volunteer not eating free lunch LOL) have seen her at the Mission Australia Christmas Lunch performing songs. 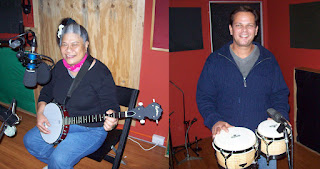 In half a day we had tracked the whole album of 17 songs, and this week I am doing the mixing.