In The Studio (Alan Dawson) - Gyuto Monks of Tibet

I had a very special group of people in the studio last night, the Gyuto Monks of Tibet  who had been traveling around Australia with the Dalai Lama and stopped off in Fremantle, after the tour, for 4 days of Teachings and demonstrations followed by 2 sold out concerts at Kulcha.

Karla and myself had been putting them up at our house and while there it was suggested that we record some material for a new CD. One of the Gyuto Monks previous CD's "Pure Sounds" was nominated for a Grammy award in the "Best Traditional World Music Album" category, however the actual line up of monks changes as they travel between India and Australia and this lineup had not recorded as a whole so an opportunity was presented.

I set them up in the studio and they did 2 chants back to back with no break (as to not loose the vibe) which ran for an hour straight through. The result was stunning, amazing what a lifetime dedication to practice produces, we then recorded Sonam (their Tibetan translator and comic relief) doing some voiceover for a future meditation CD.

The CD's of this recording should be out later in the year. 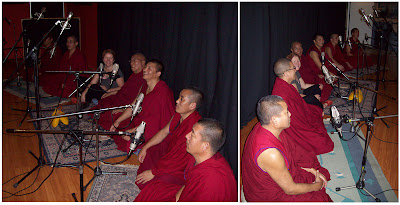 Monks having a good time in the studio,
so is Karla (who was not singing on this occasion) 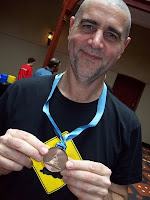 Had to get a photo with the Grammy nomination,
The Monks gave me a haircut that morning, only one cut available
(new monk).
Posted by Alan Dawson on Thursday, June 30, 2011