Bruce Gilbert:  Tracking has been completed and mixing has started, 2 songs down so far.

Rotunda:  Shaun contacted me the other day, I had recorded his band Rotunda 20 years ago and he wanted to recover the vocals from one of the songs so they could make a new arrangement.  Out came the 16 track tape machine and luckily the tape was stored with me (properly) and it was Emtec which is the best lasting of the brands.  It was interesting to hear it after all these years.

I have been mixing the Gaslight Club every Thursday, now at the new venue upstairs at Ronnie Nights   I have been using my own mixer, QSC Touchmix16 with the house PA, the QSC lets me mix out in the room via Ipad, the house mixer is stuck at the side of stage.  Good house PA, Nexo PS10's out front and QSC foldback, small but plenty for this room. 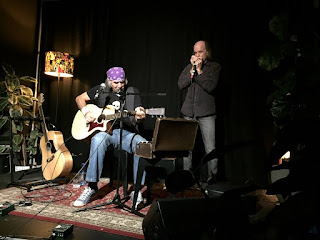 Been playing with my usual band Empire Blues, also did a St Patrick's Day gig with David Hyams which meant a crash course in Jigs and Reels LOL.